RIP Full Forms: A Complete Guide With All Existing Usages 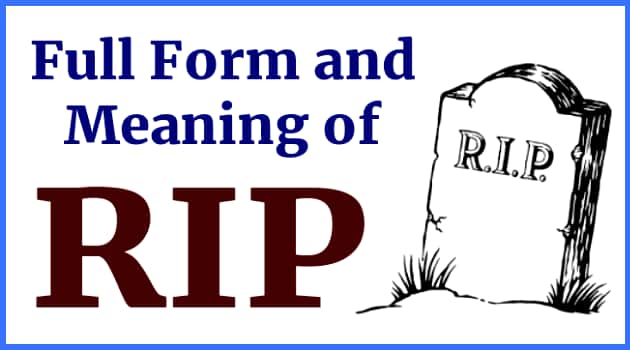 You think you already know what is RIP full form, right? You must be eager to say that the RIP full form meaning is “Rest in Peace”. But did you know that there are over 15 different RIP Full Form in English? Yes, the 3 letters R, I, and P are used to define over 15 different things with distinct meanings. So, the next time somebody tells you that they know what is RIP, you can tell this interesting fact and surprise them.

To take you through all the different usages of RIP, we have gone through several dictionaries and formulated this complete guide for you. Now with this one guide, you will know everything there is about the abbreviation RIP. So let’s get into it.

Before the modern RIP Full form came into existence, ancient Christians used various phrases like ‘dormit in pace’, ‘Requiescat in pace et in amore’, or ‘requiescunt in pace’. The phrase meant that “they died in the peace of the Church, that is, united in Christ.” These phrases can be seen in tombs and catacombs of early Christians, with the earliest records dating back to the 5th century. Rest In Peace has been derived from Requiescat in pace. And it was being widely used in tombs of Christians in the 18th century. Since then, RIP is an abbreviated form of ‘Rest In Peace.

In modern times, the abbreviation RIP is being used for several different things. The 17 most common uses of RIP are,

Most of the full forms mentioned above are used when talking about specific fields, like law, technology, and software, while some are just slang usages among the urban population. Here’s a detailed explanation of some of the most common uses of RIP.

If you happen to see RIP on some legal documents, then be sure that it has nothing to do with Rest In Peace. The RIP in legal terms is the short abbreviation for,

The term RIP is used as a short form for several scientific and technology-related terms. Here are a few examples of RIP in technological terms.

RIP is used commonly two describe two financial and banking terms. They are,

RIP also has other not so popular uses like

As you can see, a simple abbreviation RIP has so many different meanings and usages in different fields. From law and finance to software and technology, the meaning of RIP keeps changing according to the context. And that’s why you must be careful whenever you see the word RIP on something other than a tombstone. We have tried to cover most of the common implementations of the abbreviation RIP. However, there can be other uses that may have missed our eyes somehow

So, watch out and keep exploring the words and abbreviations that you think you already know everything about. And we’re sure you will be surprised by the information you’ll find.

Save Your Dry Winter Hair With These DIY Masks